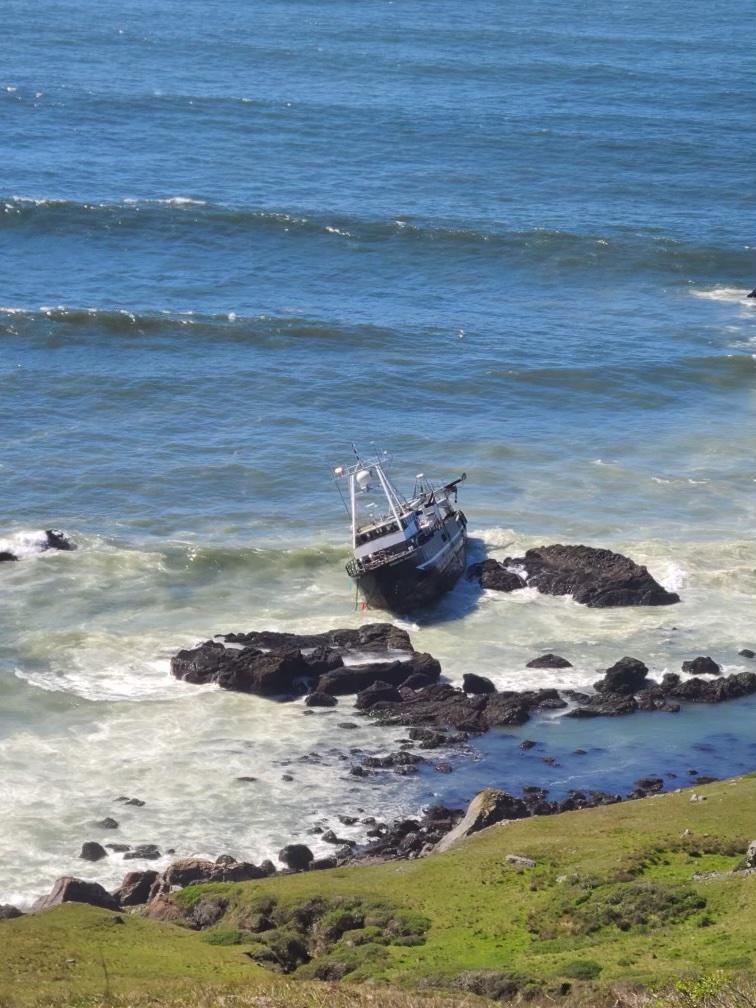 Update: Via CADFW - "The Coast Guard, California Department of Fish and Wildlife’s Office of Spill Prevention and Response, Marin County Office of Emergency Services and the Greater Farallones Marine Sanctuary established a unified command Saturday in response to a grounded vessel along the shoreline north of Dillon Beach.

Coast Guard Sector San Francisco watchstanders received a report at 8:45 a.m. Friday about the 90-foot vessel, American Challenger, being towed southward by the Tug Hunter from Puget Sound, Washington, when the Tug Hunter lost propulsion due to rope entangling the propeller.

Watchstanders diverted the Coast Guard Cutter Hawksbill crew to monitor both vessels as deteriorating sea conditions and visibility caused towing to be unfeasible. The Tug Hunter was anchored and later towed to Sausalito by the Tug Scorpius. The Hawksbill crew remained on scene with the American Challenger and at 1 a.m. the crew reported the vessel grounded on rocks in a remote area south of Estero de San Antonio.

An investigation is underway to determine the amount of fuel aboard the American Challenger. Overflights have observed a light sheen from the vessel but it is unknown if the fuel tanks are compromised.
An environmental unit is assessing protection strategies for sensitive sites in the area, including Tomales Bay.

There have been no confirmed reports of oiled wildlife."

Initial Richard James report: "Large vessel aground near Estero Americano (north of Dillon Beach). Was being towed last night, cable snapped. Coast Guard is working to place booms around it. 7000 gallons diesel is/was onboard, status unknown. Wind is howling, large surf too."
News Archives
The West Marin Feed is a curated collection of news, resources and information curated specifically for people living in West Marin with a focus on Point Reyes and Inverness.
Follow us on: