Just a family of crows hanging in their sweet nest at the beach in #pointreyes Is it a murder if it's a family?
Budget meeting today at 4 PM at West Marin School to begin floating suggestions for $1.2 million in needed cuts bit.ly/1uSqamM (via Christopher Peak, @CLPeak on Twitter)
Help local food producers Maggie Beth Levinger & Luke Regalbuto win a Whole Foods grant by voting for Wild West Ferments here:
https://www.facebook.com/WFMNo...

Search crews are fanning out across Samuel P. Taylor State Park in Marin County to search for a little girl who went missing Friday afternoon.
http://abc7news.com/family/9-y...

County fire Battalion Chief Mike Giannini said fire crews had the blaze "10 percent" contained at 10:15 a.m. after having difficulty reaching the site a mile or so inside the park on the north side of Sir Francis Drake Boulevard.
"It's a long narrow fire," he said, adding fog prevented state aircraft from lending a hand. "We've got a lot of resources coming in," he added. "This will be a ground battle. It will be a long day."
http://www.marinij.com/marinne...

DBOC on NPR today. Looks like those signs are paying off. And of course, a blistering discussion has broken out in the comments. Someone needs to let Sarah Rolph know.
http://www.npr.org/blogs/thesa...
BREAKING NEWS: Via Nels Johnson: "Fire burning now at Sam Taylor Park. Ten acres in park interior." Anyone else have any updates on this?
From Loretta Farley: "Grass Fire on Mount Barnabe this Thursday morning - approximately 10 acres as of 8:00 am - no structures are in danger watch for trucks and activity along Sir Francis Drake."

It definitely 'shipping day' out at one of the ranches today. I was behind the whole convoy of cows going to meet their maker. One of the ranchers yelled out 'go eat a hamburger!' as I drove by.
Via Marc: "Friday, 10am Large empty cattle trucks headed out to the point (Reyes.) Somebody losing a herd? A ranch shutting down?"
I saw those too, Thought it was related to Western Weekend, but I'd say not. Maybe it's 'time for steaks' day?
The powerful documentary 'Seeds of Time' is screening tonight at the Point Reyes Presbyterian Church at 7:30pm.
More info here: http://www.ptreyesbooks.com/ev...
Trailer here: http://seedsoftimemovie.com/tr...

Via Kegan: "from dave brast: Beware! Automobile break-in and theft
I just received the following email from Judy Spelman and Rich Schiller: One of our cars was broken into while parked on Limantour Road, near Bear Valley Road and virtually everything in it removed through the window they shattered. Police expect more such break ins in coming days which is why we're sending this email. Our mistake, apparently, was having one side of the car close to roadside bushes, which gave the thief cover. Take good care!
js and rs"
This information came from the West Marin Commons forums. There is a ton of excellent information on there, be sure to go over and join: http://www.westmarincommons.or...
I just remembered to track this down. For the history buffs out there. I still think we should do a Kickstarter campaign to find the gold...
http://vimeo.com/84702412

Apple has a crush on Point Reyes. First the ads in the New Yorker, now it's featured in their iOS8 preview material. Maybe we can get some discounted product?
http://www.apple.com/ios/ios8/...
Microclimate! Check out this really cool weather 'eddy' swirling right off the coast from us this morning.
https://www.youtube.com/watch?...

Somehow, my invitation to this wedding was lost in the mail. They did a pretty amazing job, I'm pretty sure this is what people fantasize about when they see Launch For Hire...
http://www.100layercake.com/bl...
6:21am - SUV CHP setting up at the reservoir. Drive safe.

A Centennial Celebration of Marconi & RCA Wireless Radio in West Marin, 1914-2014. So much good stuff going on this month, check it out:
http://www.nps.gov/pore/planyo...
Lots of music happening tonight in West Marin:
Brian Laidlaw and Danny Vitali celebrate the release of their new album, Echolalia, at 8 p.m. in the Dance Palace Church Space. Jeremy Harris, plus Rob Shelton and Carly Bond of DRMS, will join them. $10 to $15 sliding scale admission.
The Ford Blues Band, with Patrick Ford and Volker Strifler, performs at 8 p.m. at Rancho Nicasio. $10 in advance, or $12 at the door. For tickets call (415) 662.2219.
Beso Negro plays gypsy jazz at 9 p.m. at Smiley's Schooner Saloon, in Bolinas. Cover charge. 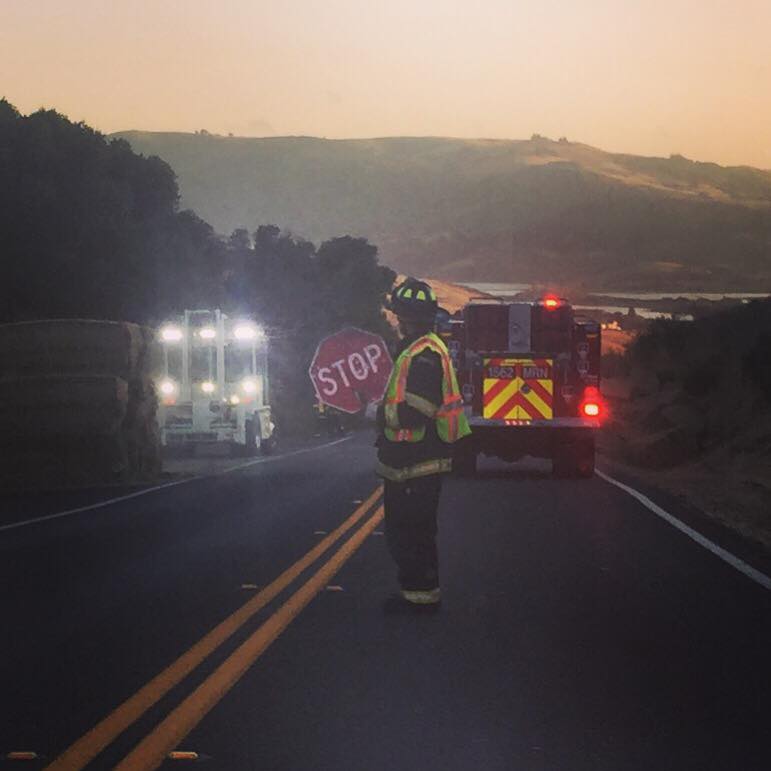